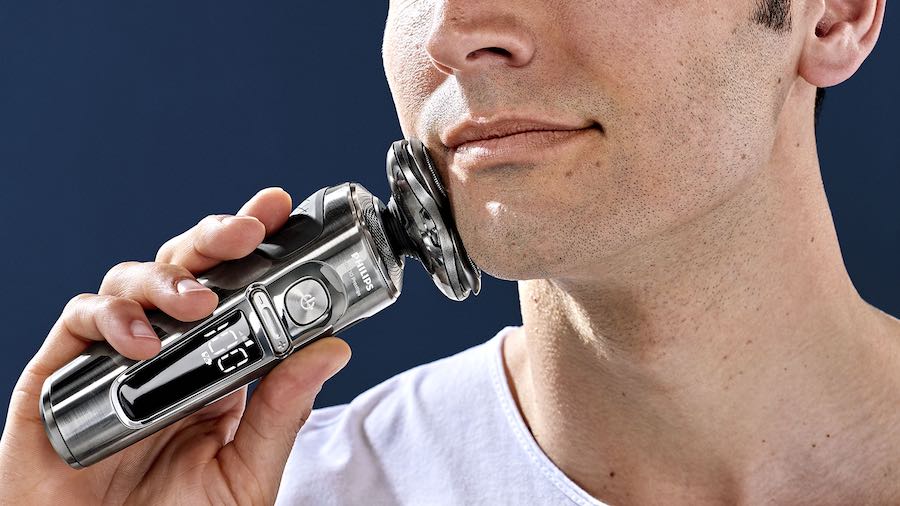 The multi-direction ContourDetect heads, with Philips’ proprietary rotary technology, capture hair growing in different direction and densities, delivering the ultimate close shave even in tricky areas along the neck and jawline.

Experience better well-being for the skin, with Superb SkinComfort rings that come with an anti-friction metallic-pigmented coating for smooth gliding. The shaving head also comes with new wider, rounder openings to catch more hair in a single pass.

Thanks to Philips’ BeardAdapt Sensor which checks hair density 15 times per second and automatically adapt shaving power to your hair, you are ensured of a highly efficient shave even on a longer (up to 7-day) beard.

Highly customizable, opt for a comfortable dry or wet shave with Aquatec Wet & Dry technology, or switch between 3 modes for anything between a gentle and thorough shave, an everyday shave, to a quick shave.

The Philips Shaver S9000 Prestige has luxurious features, including wireless charging of the shaver or any Qi-compliant device on a Qi charging pad, to up your technology quotient. It also comes in a premium packaging that stores your grooming essentials.

Philips-Commissioned Survey on the Meaning of Masculinity

In celebration of the milestone, Philips commissioned a nation-wide survey examining the perceptions held by Singaporeans of the pressures of modern-day masculinity, and its relationship to men increasingly taking control of their lives with regards to keeping up with their appearances.

“Empowered consumers have not only become a significant driver of our growth, but also the inspirational force driving our product innovations,” said Mr. Jinseok Chang, General Manager, Personal Health, Philips Singapore.“In response to growing demands from consumers who are taking on a more active role in their health and well-being, Philips commissioned this survey to celebrate how consumer-sourced power informs and influences our product innovations.”

Conducted in collaboration with YouGov, a leading global market research and data company, the Philips Modern Masculinity Survey surveyed 1025 Singaporeans (502 males; 523 females) on pressures stemming from societal expectations in keeping up with appearances against evolving definitions of masculinity.

Physical appearance as a strong indicator of masculinity

Results revealed that more than half (52%) of Singaporeans polled used words relating to physical appearance to describe masculinity. A man’s strength (49%), body physique (47%), being manly (42%) and facial looks (18%) were top ranking attributes. The majority of men (84%) and women (81%) viewed being clean-shaven as important if a man was to be seen as presentable. Almost two-thirds of respondents also related a man’s success professionally to looking good and being well groomed.

Beyond physical appearances, the conversation around masculinity also revolves around behavioral traits, including how men think and act. Almost half (49%) of men surveyed admitted to feeling pressured to act or behave in a masculine manner to keep up with societal expectations of them.  More men (54%) than women (43%) believe that society expects them to be authoritative and assertive. Men are also more likely to feel that society does not accept male vulnerability, although this viewpoint is more prevalent in older males.

While traditional views of how a man must provide for the family still firmly holds its grounding, Singapore society is actually accepting of a woman earning more than her man.

Singaporeans hold progressive views of masculinity stereotypes.  Male respondents named these top three criteria: being supportive to others (67%), being a good parent (65%) and having emotional intelligence (61%). Female respondents named the following top three criteria: being a good parent (76%), having emotional intelligence (71%) and being kind (70%).  These were valued over men being the breadwinner of the family (men 42%, women 48%), withholding emotion or feelings during personal hardship or pain (men 35%, women 19%) and being assertive (men 26%, women 24%). Progressively, Singaporean men are focusing on identity and self-awareness to take control of their lives. Investing time and effort in personal grooming were viewed as important traits for today’s men.