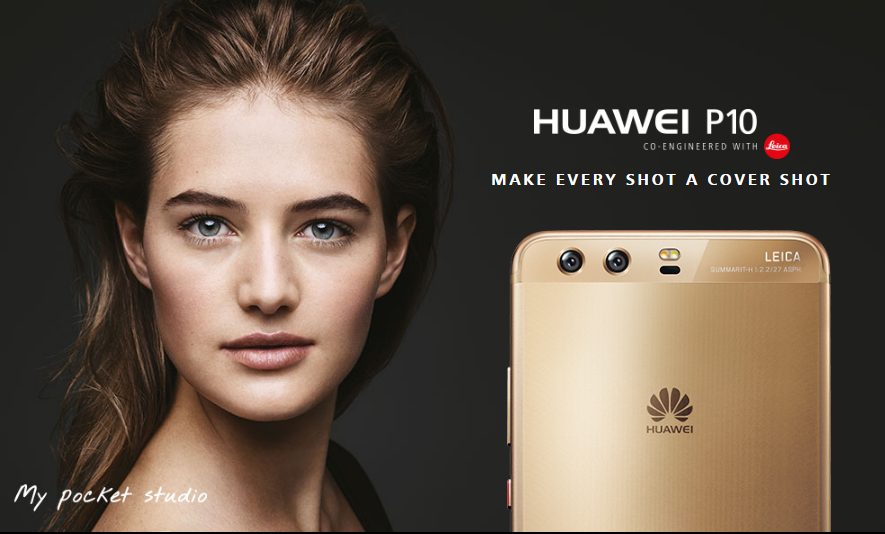 At first glance, the P10 looks like a hybrid finish of the iPhone 6 Plus and the Google Nexus 6P. What sets it really apart is the word, Leica, besides its rear camera.

The P10 features a 5.1-inch full HD (1080p) display and at the bottom, you have the menu button with the fingerprint sensor embedded underneath it. Besides having these two iPhone-like functions, Huawei added in its own navigation functions that allow users to slide their fingers left or right to access Recent Tasks, slide up to access Google Search, touch to go back or Touch and Hold to return to the home. Huawei calls this Smart Touch.

Unlike other phones that run on Qualcomm Snapdragon processors, Huawei uses its own Kirin 960 CPU, Octa-core 4 Cortex A73 2.4 GHz + 4 Cortex A53 1.8 GHz, with 4GB of RAM, 64GB of internal storage (expandable) and runs on Android Nougat 7.0. The P10 is not a heavy phone, only weighing at approximately 145g, which is just a tad heavier than the iPhone 7.

The key focus again this time for the Huawei P10 is still its camera. The P10 has a Leica Rear Dual Camera 2.0 Pro Edition on its back featuring a 20 MP Monochrome sensor and a 12 MP RGB sensor with an aperture of f/2.2. It also sports a Dual-tone Flash, Laser and Depth Auto Focus, 2 x Hybrid Zoom and it supports 4K video recording.

And at its front, the P10 has the Leica 8 MP sensor and a wider aperture of f/1.9, which should give you a brighter shot in low-light conditions. Something different this time around is that when you are taking a wefie, the front camera auto-detects the people in the frame and reframe itself accordingly.

Of course, their partnership with Leica is more than just camera lenses. The P10 offers a Professional Mode where you can control your ISO, Focus, Exposure, Shutter Speed, White Balance, Metering and the type of output like RAW format instead of JPG.

The battery is non-removable like many other smartphones and it has a 3,200 mAh juice that should be sufficient for moderate users to last a day.

Huawei has been a familiar name to me thanks to my internship stint at SingTel 11 years ago. Oh so old. To see it transform from a not-so-well-known brand in Singapore to a force to reckon in the mobile market is just breathtaking. But sentiments aside, on paper, the P10 is not really offering anything special. The boasts about its camera so far have received lukewarm reception as shots taken are not consistent.

Comparing it with other smartphones launch at MWC 2017, the Huawei P10 seems to be more inferior. One may argue that perhaps its brother, P10 Plus, is the better phone. But there isn’t really much difference other than the upsized specifications.

Anyway, this is just an early first look, on paper and gathered review, at the Huawei P10. So giving you a final verdict right now is unfair to Huawei. Hence, stay tuned for more updates as we love to check out the phone in detail.

The Huawei P10 and P10 Plus will be available in March this year in various countries except in the US and yes, it is coming to Singapore (according to its press release). The P10 will be selling at Euro 699 and the P10 Plus will be selling at Euro 799. The smartphone will come in Ceramic White, Dazzling Blue, Dazzling Gold, Prestige Gold (P10 only), Graphite Black, Mystic Silver, Rose Gold, Greenery.