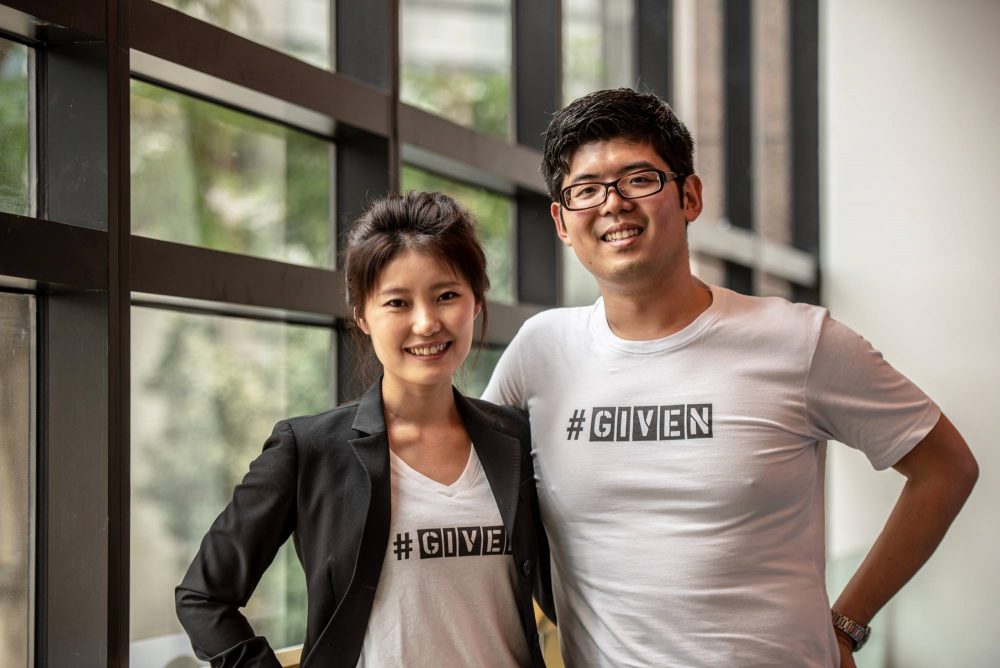 Husband and wife, Charles Tan and Cao Xin Xin met while working in the financial sector a few years ago before setting up The GIVEN Company in January this year.

Unlike other social enterprises, The GIVEN Company is the first to reward people who buy their ‘T-Shirts for Good’ a chance to win prizes that are worth more than S$180,000 including a Mercedes-Benz CLA 180 Coupé.

Also setting them apart from other fundraising platforms is that The GIVEN Company uses blockchain technology to make all transactions and lucky draws secure and transparent.

The social enterprise aims to raise $1 million by selling 50,000 T-shirts at $20 each by October, and they are not taking a single cent because all proceeds will go to the partnering charitable organisations.

So how do they intend to do that? What’s their plan?

Here’s the story of The GIVEN Company.

What were you doing before setting up The GIVEN Company?

Xinxin and I met in London, where we were both working in the finance industry but returned to Singapore in October 2016 to spend more time with family after my mum was diagnosed with cancer and underwent major surgery to treat it. I spent a short stint with a fintech startup while Xinxin explored various business ideas (including hospitality and healthcare) before we set up TGC in January this year.

Can you share with us what is The GIVEN Company and how does it work?

TGC is an incentivised giving platform, which means that we encourage people to give more than they otherwise would by offering them a chance to participate in a lucky draw while supporting a charity of their choice.

In our first draw, the public can get involved by buying ‘T-shirts for Good’ at $20 each, and voting for a charity they would like The GIVEN Company to support, either by nominating one of their choices or from the list of official partners.

Each purchase also entitles the platform’s users an automatic entry into the lucky draw, to win a brand-new Mercedes-Benz CLA 180 Coupé and other cash prizes, worth more than $180,000 in total. All of the net proceeds from the sales of T-shirts will be donated to the respective charities nominated by customers, and the platform will not be receiving any fees or commissions about this event.

How did the idea come about?

One of the first things I did after returning to Singapore was to begin volunteering my time. I had been doing so with a few charities and grassroots organisations for about a year, and one of the things I learnt was that while these organisations were doing good work, securing sustainable funding was an issue. We did our research, spoke with around 30 different charities about their existing fundraising methods, and resolved that we couldn’t keep doing the same things and expecting different results. Our search for a proven, sustainable way that has worked successfully in the US and Australia, for example, but hadn’t yet been tried here in Singapore, led us to what you see today – The GIVEN Company.

What were the initial challenges you faced and how did you overcome them?

One of the initial challenges we faced was that our operating model is relatively new in Singapore and that it may, therefore, take some time before it gains mainstream acceptance. We understand that will take quite a bit of time to explain our concept and gain the trust of our partners, stakeholders and the public but we aim to demonstrate our commitment through ensuring full transparency. We will do so by publishing the full audited statement of accounts, that we will submit to the Singapore Police Force, on our website for public reference and audit.

Why did you set the target of selling 50,000 t-shirts in two months?

We wanted to aim high so we could make a significant impact on the charities we have partnered with, and we wanted our proposition also to represent value to our users. Two months may even seem like an ambitious timeframe, but we reasoned that in today’s world, with short attention spans and so many things going on, it made little sense to drag something out for too long.

You will be donating 100% of the net proceeds to the charities that The GIVEN Company partnered. How do you sustain your organisation?

At the moment, we’re entirely bootstrapped with our savings and working without salaries. We understand that entrepreneurship (and especially social entrepreneurship) requires sacrifice, and so we’re putting our money where our mouth is. In the short term, we’re also in the process of applying for grants to help ramp up headcount. Eventually, we’ll have to charge a fee/commission (estimated at 5 – 10%) on funds raised to help cover operating costs. However, our goal is not to maximise profit but sustainable social impact.

Where do you see The GIVEN Company in the next 5 years?

We hope that the TGC platform will be able to raise significant funds for each of the charities we work with, and to do so not just in Singapore, but across the broader Asian region. We also hope TGC will be part of a more extensive suite of technology solutions (including some hardware projects we’re exploring at the moment) that will help the charity sector engage with a larger, younger demographic, earlier in their giving journeys, and set them on a longer path of volunteerism and philanthropy.

Next post 5 tips to prepare yourself for F1 Singapore

giga! commits up to 10,000 mobile lines to Persons with Disabilities