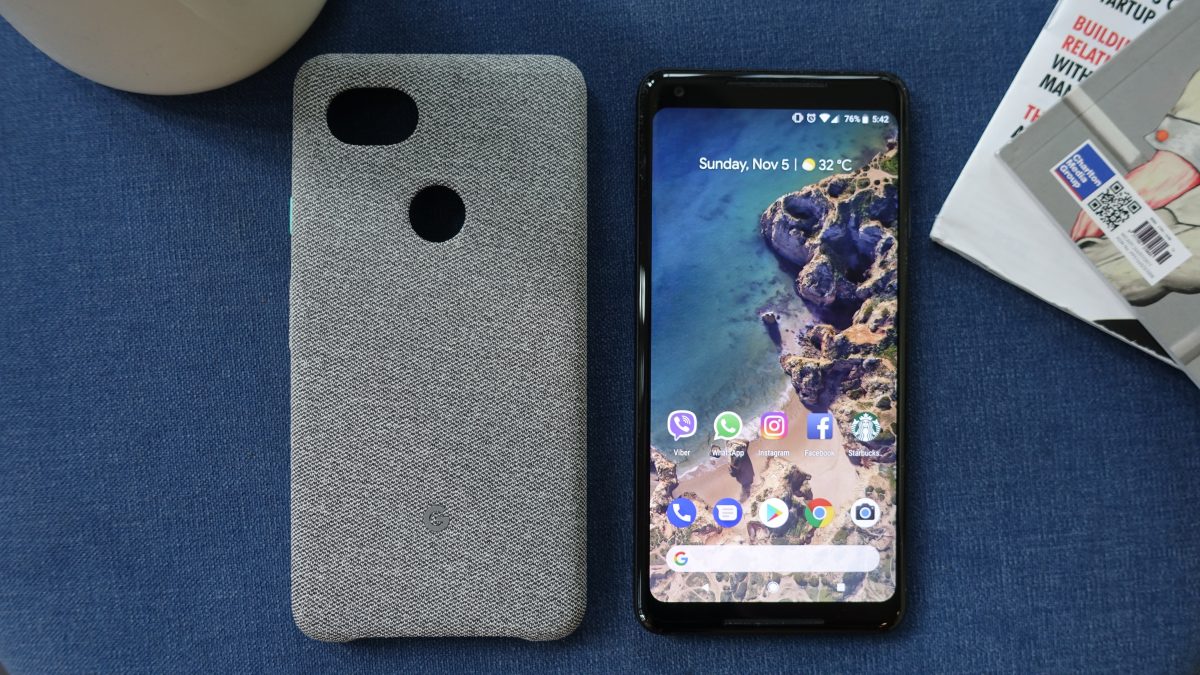 We were super excited when Google announced that the Google Pixel 2 XL is coming to Singapore. Many reviewers have shared their views of the 2 XL, and some also said that this is the best Android smartphone ever built.

So just how good is it?

Here’s our review of the Google Pixel 2 XL.

Nowadays, smartphones are getting more and more similar looking, and that could also be one of the reasons why Samsung, LG and even Apple are getting more creative by tweaking their phone designs, reducing the bezels in the process.

The Google Pixel 2 XL is no different. Its appearance stands out from the crowd in an instant, and it gets even more evident at the back of the phone with two different texture on the top and the bottom.

The Pixel 2 XL has a 6-inch pOLED screen and a Quad-HD+ (2880 x 1440) display, which makes everything you display on this phone a pleasure to view.

Picking it up and having it in your hand feels great and sturdy. The power button and the volume rocker are both located on the right side of the phone that makes it easier to access those functions in one hand on this big phone.

Flipping it over to its back, you will see a fingerprint reader, but unlike some other phones, this is not the Home button. It is not clickable. Hence, it’s primary purpose is solely for fingerprint access.

Located right below the Pixel 2 XL is a USB Type-C port and as per many latest flagship smartphones, it does not come with a 3.5mm headphone jack. It could be because they want you to get the Google Pixel Buds. Or, you can use the dongle that comes with it.

Underneath the water & dust resistant aluminium unibody, is a Qualcomm Snapdragon 835 processor, 4GB of RAM and 64GB of storage, which is not expandable with a microSD card. We do not think that anyone can have anything to complain about the missing external storage when Google is offering unlimited online storage of your photos and videos, until 15 Jan 2021.

The Pixel 2 XL runs on the latest Android 8.0 (Oreo), which is not a surprise that they are the first to be running that version of the Android OS.

During our test, the Android’s latest operating system ran smoothly without encountering responding issues. Switching between apps were fast and instant, and there were no noticeable lags.

One of the things that makes the Google Pixel 2 XL unique is on its cameras. It is true that the smartphone does not have two rear cameras like many other flagship smartphones in the market. However, this is precisely what makes the Pixel 2 XL different.

The rear camera of the Pixel 2 XL is 12.2MP and has an F1.8 aperture. The specifications are pretty decent, but it is the software that makes things pop. When taking photos in Portrait mode, the integrated machine learning feature automatically segments the subject and blurs its background for the bokeh effect or to produce the shallow depth of feel effect.

Here are some of the sample photos we took in portrait mode.

If you are wondering, the average point and shoot photos taken using the Pixel 2 XL also look great. Some people may argue that it lacks saturation when comparing it with other brands like Sony Xperia XZ1, Samsung Galaxy series and Apple iPhone 8 Plus, but we do feel that it is just right. Of course, if you want to make it better, you can try using photo-editing apps to bring the saturation level higher.

Even in low-light conditions, images look brighter, sharper and very usable. Check them out there:

At the front, the Pixel 2 XL has a 8 MP camera with an aperture of F2.4. With AI in control, you can be sure the photo will look crisp and sharp.

The Google Pixel 2 XL comes with the latest upgrade to the Google Assistant that is the Singaporean English (Singlish) version. Not sure why but we were unable to test out the Singlish update.

However, we did use the Google Assistant very often as always, and we find it incredibly responsive. We were able to call out to it 10 metres away from us while we were gaming so you can imagine the noise level in the room. One of the Android-powered phones that we were testing didn’t respond to us even when it was nearer.

We used the Google Assistant to coax a toddler by having it sing songs for the baby, asked for directions, Google for information, got it to tell us something we don’t know and set our reminders. Everything was on point.

There are three ways that you can wake your Google Assistant.

One of the most useful features of the Google Pixel 2 XL is the Google Lens. Snap a photo, and you can get information about that specific image straight on your phone. But through our experience, it only worked when it was on a more straightforward object.

During our test, the Lens did not work well when the text was relatively small or when there was more text for it to read. In these circumstances, we were unable to extract the exact information that we want, i.e. the URL and contact number.

With more updates to the Lens, the accuracy will improve.

The audio coming out from the Google Pixel 2 XL is a head-turner. Literally. We had people asking us what is the phone in our hands because the sound blasting out from the two front-firing speakers were delightful to hear. As we do not have the required equipment to test the sound quality of the speakers, here’s a video by PocketNow to show you the difference.

The Google Pixel 2 XL has a non-removable 3,520mAh battery. We were able to squeeze out almost two days of juice. However, charging it is another story. It took us about 2.5 hours to charge the battery from 6% to 100%.

Our advice? Don’t let it deplete till such a low percentage before charging.

The Google Pixel 2 XL is more than just another Android smartphone. It is pure, better and more efficient than other Android-powered smartphones in the market. The image quality produced by the cameras look crisp and Instagram-ready, and even in low-light conditions, the noise level is reduced, and the shot looks better than other photos taken by other smartphones.

Audio quality on the Pixel 2 XL sounded great. Combining it with the pOLED and QHD+ display, it gives a massive boost to the video watching experience.

It seems like Google has placed a huge bet on the software more than hardware. But it has indeed paid off.

Hands down, we do recommend anyone who is looking to get an Android-powered smartphone to get the Google Pixel 2 XL.

The Google Pixel 2 XL is now available at SingTel in Black_n_White or Just Black. You can get it at S$598 with a Combo 3 plan.