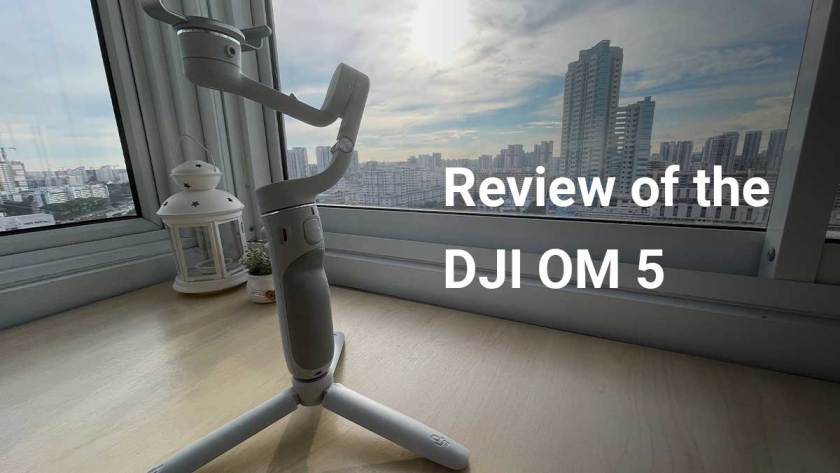 Every year, DJI will add some nifty feature to its OM series and this year is no exception.

DJI has launched its latest mobile gimbal, the OM 5, a few weeks back and has been highly raved for a new feature that is set to be a game changer. Here’s our review of the DJI OM 5 to share with you more.

If you have not watched our unboxing video, you can check it out down here.

If you have, well, you would have seen how amazing the new OM 5 looks. It still has all the must-have handy buttons around it that you can just toggle with one hand.

There’s your record button, a thumbstick to rotate your axis, a zoom in and out button, a portrait to landscape button and a fix-your-gimbal’s position button so that it does not go wild when you tilt your position.

Now, let’s talk about the new stuff and the most raved about feature of the OM 5. Let’s start with the built-in extension rod. Yes, baby.

While the extension rod has been around for many years, mostly just to hold your smartphone for a wider angle shot, it is the first time that it is attached to a gimbal. The extension rod on the OM 5 can be extended up to 215mm.

If you think that the load on your wrist will be significantly heavier if you have the rod extended, you are in for a surprise. DJI has made changes to the weight of the OM 5 and it has become much lighter, which I supposed is to counter the weight-balance between when the rod is fully extended and when a smartphone is attached.

I did not encounter fatigue when trying the OM 5 out with its rod fully extend and my iPhone 12 Pro Max on for about 3 mins or so. But if you want to hold it for a much longer period then you should attach a lighter smartphone. By the way, who shoots with your extension rod for so long anyway? Leave your comments down below.

With great hardware, comes complementing software. In DJI’s case, it is the Mimo app and it is where most of the magic happens.

This year, there are two exciting upgrades. One is the updated ActiveTrack 4.0 and two is ShotGuides.

The new ActiveTrack 4.0 is much more responsive to your movement and can track really fast. It was able to capture my movements very well but If you intend to use it for your vlogs or just record a short video clip with you in it, maybe don’t use the tracking. I found that it responds to the slightest movement. This means that it will move as you move, which in post-production, you might find it swivel a little too much.

While we all want to be the next Peter McKinnon, we will never be him. That’s why there’s ShotGuides. It is a new feature on the DJI Mimo app that complements the OM 5 greatly.

It automatically detects your environment and shows you how to take better angled footages. They have quick video guides appearing on your screen and useful tooltip guide on how to rotate your OM 5 for the best effect. This is excellent. It allows you to film like a pro without the need to be one unless you are already one.

But it kind of gets a tad annoying after a while as it covers almost half your screen, so toggle it off if you need no sensei.

The OM 5 delivers what it promises and what all other DJI’s gimbals promise. I mean it’s a stabiliser and it has one primary job. From my perspective and my experience with it, if you ninja-walk with the OM 5, your footage will be smooth. If you walk normally, it will be smooth but it will try to adjust itself. The adjustment is negligible unless you are filming The Maze Runner where you want every scene to be “stable-perfect”.

So, in a nutshell, you are getting what you will be paying for at a pretty budget price.

Should you buy the DJI OM 5?

Honest truth, the built-in extension rod on the OM 5 is definitely a big temptation for aspiring film makers and tourists (now that Singapore has opened the Vaccinated Travel Lanes to many countries). I was sceptical at first but I am now a believer. The extension rod opens up possibilities to angles that you had to risk your life to take a certain shot before.

Other than the features we talked about, there are other interesting ones you can try out as well via the Mimo app like:

So, I think my take is… to buy and try it out yourself if you have S$219 to spare and if you want to take your filming game to the next level.

Next post Sony Electronics Continues to Redefine Excellence in Imaging with the Introduction of the new FE 70-200mm F2.8 GM OSS II