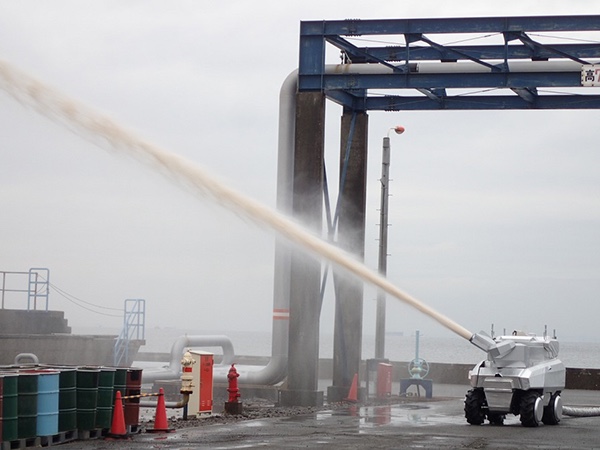 Mitsubishi Heavy Industries, Ltd. (MHI) has developed two firefighting robots: the “Water Cannon Robot” and the “Hose Extension Robot.” As a team they are expected to play an active role in situations too hazardous for firefighting crews, such as fires at petrochemical plants.

Together, the two robots, when integrated with a “reconnaissance and surveillance robot” (available in aerial and ground models) and a command system, constitute a “Firefighting Robot System.” The system is designed for installation on a dedicated transport vehicle that can be brought directly to the location of the fire.

The Firefighting Robot System was developed by MHI through the company’s participation in a 5-year project led by Japan’s Fire and Disaster Management Agency (FDMA), to respond to energy and industrial infrastructure disasters. On March 22, an open demonstration of the newly developed robots’ performance was held at the National Research Institute of Fire and Disaster in Tokyo.

The two models developed by MHI are built on chassis frames modified from small farm buggies that offer strong suspension combined with outstanding road maneuvering. The frames are equipped with GPS and laser sensors that together enable autonomously controllable movement. With the integration of advanced technologies, the robots are able to self-drive directly to the scene of a fire, equipped with an attached firehose.

After arrival at the scene, the Water Cannon Robot is left in position and the Hose Extension Robot moves to the water source – a fire engine, hydrant, etc. – while laying out its hose on the ground, extendable to a length of 300m. The hose is of rigid, heavy (2kg/m) construction, with a 150mm inner diameter (nominal diameter 150A). It is automatically extended and rewound in coordination with the movement of the robot, ensuring proper laying on its intended path, including maneuvers around corners.

The Water Cannon Robot comes with a nozzle for discharging water or foam, with capability to release up to 4,000 liters per minute at a pressure of 1.0MPa.

Going forward, MHI will continue to focus on developing a wide range of robot-related technologies that will make solid contributions to the ongoing advancement of social infrastructures.